So I made a blazer 🙂

Inspired once again by Anne’s numerous makes, I was turned on to the clean lines and versatility of this pattern.

Although I really like the short version, I settled on the longer version first, as the fabric I used was more dressy and i wanted it to be wearable for both office attire and with jeans. 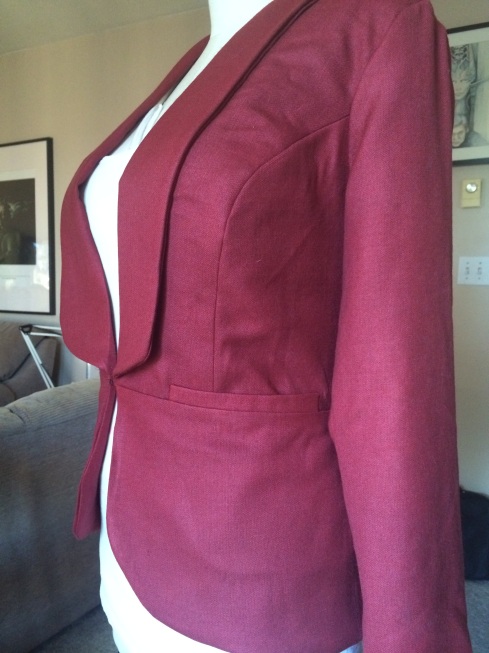 I swear it’s pressed, but the fabric has a soft drape and texture, making it appear creased, which along with a burn test, makes me think it’s linen or a linen blend.

I’m showing it pictured here on Patience, as it’s easier to get a feel for the style lines and texture of the fabric when it’s sunny, and it was, fortunately, when I finished it and took these shots – but hasn’t been lately 😉

I found it interesting that the pattern calls for most of the body to be interfaced, but I wanted to keep the softness of the fabric so I used a weft interfacing in a little lighter weight than my fabric. It was the first time for me using this type, and with all the steam required to press & shape these seams I feel like I probably should have pre-shrunk it because it shrank during application so I steamed the crap out of it before sewing so it wouldn’t cause me too much heartache later on. It still did, but not too badly 🙂

I also added a self drafted sleeve head for a little extra support.

The lining is a superb quality Bemberg rayon which is just a delight to touch and wear but as always, I despise sewing lining because Bemberg is notorious for misbehaving lol.

As for fit, I did two FBA’s; one and then another adjustment again after my first muslin. I adjusted the waist just the once but should have tweaked that as well the second time; that said, it fits with a hook & eye at the waist rather than a buttonhole so that’s fine. I also lengthened the sleeve 3″. These are all standard adjustments for me so pretty much normal 🙂

I would like to make this again, in the shorter version but I plan faster than I sew so may not happen anytime soon, as I have a massive queue, including wedding sewing lol 🙂

In other news, Me Made May is fast approaching and I’m taking the pledge for the first time! 🙂 I know I have really limited choices in lounge wear so I suspect that will be my biggest challenge but challenge is the whole point! I’m nervous but excited to see what I learn 🙂 Anyone else joining in? 🙂