And by that I mean Colette Laurel, of course 🙂 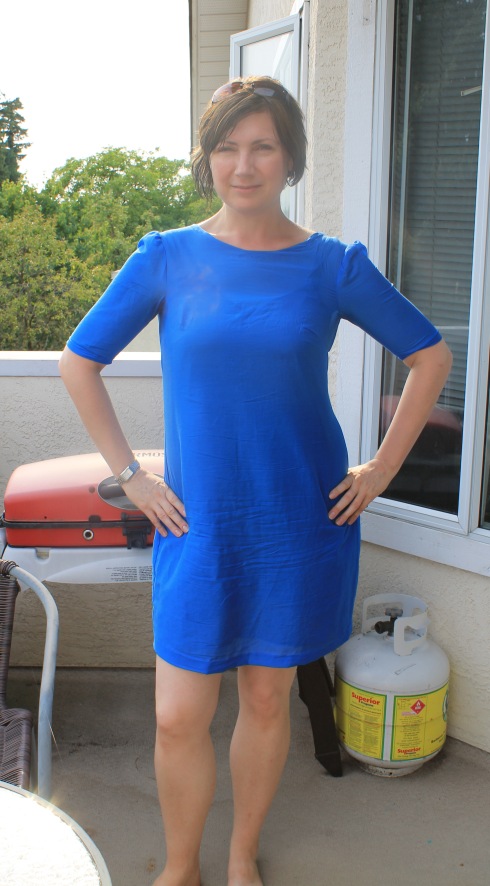 And this is after wearing it all day at work, and 3.5 hrs on public transit in the sweaty heat… hence the wrinkles 🙂

A fitting entry back into the world of sewing, if I do say so myself: this dress is a joy in every way. It is the perfect combination of demure and sexy. It has a simple silhouette but is saved from being a sack by vertical darts and bust darts (yay for bust fitting – my girls don’t look good in sacks – more on that later LOL). If that wasn’t enough, it’s comfortable, and makes me feel pretty at the same time – nice!! 🙂

To be honest, I wasn’t going to buy this pattern – after all, I already have lots I haven’t even touched. I bought it when it was released because I was going to enter the super fabulous contest Colette was holding. As it turns out, my plans for that version of Laurel went all out the window and it wasn’t until a few months later, fabric shopping with my mum, that I was inspired to make this beauty.

The fabric is silk cotton, and it’s sheer. It’s absolutely gorgeous. I could have used the handy-dandy built in instructions on the pattern to do an underlining but I decided the fabric needed to keep its light, breezy quality, so I decided to make a slip. So here I am in the fabric store, planning a dress AND a slip, when I haven’t even sewed anything in months LOL. Even I was pretty sure this was a pipe dream, and that pretty fabric would wind up in my stash. I didn’t care, as long as it became mine. LOL.

Nevertheless, I surprised even myself by getting to work on the slip project shortly afterwards. First roadblock: I didn’t have a slip pattern. No worries! I’d just download one – there’s tons on the interwebz, right? But none of them were quite right… so I drafted my own. Yup, just like that. Turns out I can do stuff. Whoda thunkit? LOL

A little more on the dress:

So back to the topic of sacks… this wasn’t TECHNICALLY my re-entry into sewing – I actually attempted a Burda drawstring halter top, which I was SUPER excited about, as it was exactly something I’d been dreaming about for a long time. Alas, after drafting the pattern, and spending an entire evening lovingly sewing it out of some beautiful Chinese silk I’d nabbed at a thrift store, and hung onto for just this blouse, I put it on triumphantly and then stared in horror at what I beheld in the mirror: me… only 14 months pregnant with quadruplets. I am not exaggerating.

We will not speak of this anymore.

So… Laurel!! Go get this pattern, friends… it’s a winner 🙂