A happy problem… but a problem nonetheless

So an update on my cardi, folks (and hopefully you’ll understand) but I got to the end, was about to attach my buttons, and decided I don’t like them – at least, not for this project. I had some basic red buttons to match my fabric but the cardi has kind of a boxy, vintage look (probably because it’s from a vintage style pattern hyuk hyuk) and I thought it would look much cuter with little clear buttons. They don’t have to be vintage glass but at least reminiscent of it… so until I find the right buttons, there it hangs unfinished lol.

Now onto my happy problem. I’ve lost a bunch of weight, yo. And I’m still losing. None of my clothes fit me – including all my me-mades – which is kinda unfortunate, and leaves me with pretty much nothing to wear. I don’t want to buy or make anything new ’cause I’m still planning on losing more, but what do I do in the meantime?

Well I figured I could get started on a muslin for the Cake Pavlova top, as it’s on my SWAP list, and it is a form fitting wrap top made from jersey. If it’s a bit loose in the future, I can just tie it a bit tighter 🙂 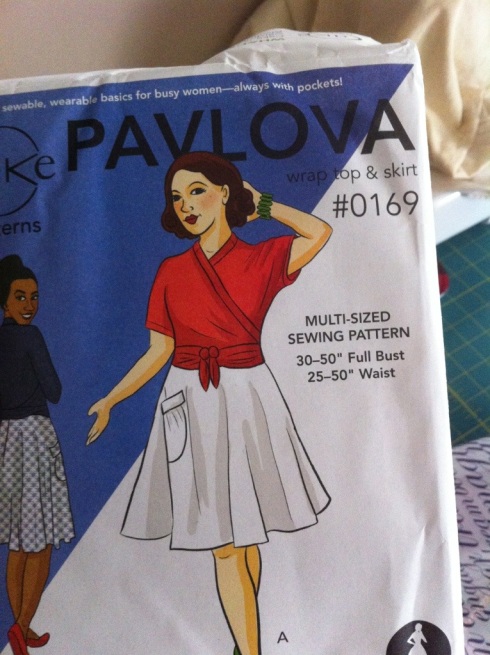 So making Clovers is out for awhile, but I thought maybe after the Pavlova I might do a quick wrap skirt or two – same idea as the top in terms of now/future fitting. What do you guys think for those ideas, to tie me over? 🙂

Someone pressed my ‘pause’ button

Yes, I’ve been a real slowpoke this past week, and definitely feel like I’m on pause 😛

The main reason is that it’s been a week on this diet, and while so far I’m doing really good, the first few days were really tough; I suffered from some pretty crappy detox symptoms, which apparently is normal when you cut starches and sugars out of your diet.

As a result I’ve been incredibly unproductive the past week, and barely got anything done.

The other problem is that now that I can see this program is probably going to work for me, I don’t see the point in continuing to make stuff that won’t fit me in a month or two. I’d rather wait and save my time, energy and pretty fabrics for when I can actually keep and wear them longer 🙂

I have been working on a cardigan, however, cause I had it started and I figured it’s ok if a cardi is a bit big 🙂 I just haven’t made much progress, because of the aforementioned lack of energy from detoxing.

Now that that’s over though, I have more energy and am feeling great! I suspect I’ll have something to post maybe by the end of this week – next week at the latest 🙂

Getting Personal: My Weight Loss Journey

I started this blog to document my projects: art, design, sewing, etc…. but there’s one project I haven’t talked much about and that’s my health.

I debated on whether to write this post because it’s pretty personal but I thought if I could help one person feel that they weren’t alone, it would be worth it.

I’ve struggled with weight issues all my life. Like my mum, despite our best efforts to maintain a healthy diet and regular exercise, it’s a constant uphill battle with our metabolisms. Back when I was in my early 20’s I joined a gym, took martial arts and carried around a little notebook, pen & calculator everywhere to record & calculate my food calories & fat grams. I knew if I wanted results it would take a hardcore commitment. I lost 40 lbs in 9 months and never felt better. Then I went to college for 3 years, followed by eight years of career, and all that weight came back and more.

Over the years, I’ve tried cleanses, diets, lots of stuff. Nothing worked. Finally in November 2011, I decided to do the only thing that worked for me in my 20’s – go hardcore. I began working out every day, counting calories and eating clean (mostly). It’s taken me over a year this time but I’ve lost just over 35 lbs. Problem is, I still have a ways to go and I’ve been in a plateau for over a month. In fact, I’ve even gained a couple lbs despite still maintaining a calorie deficit. SO depressing 😦

My mum recently told me about this diet her friend went on, and which she is planning to try. Her friend lost over 20 lbs on it, and she was the same; had tried everything else and nothing worked. It sounded at first like every other fad lose weight quick scam out there and I was immediately skeptical. But I did three days of intense research, and my skepticism turned to grudging respect as I began to see there was indeed research, scientific evidence, and lots of success stories.

I’m not going to go into it too deeply because this isn’t a promotion for products or diets. What I am going to say is that it’s going to require a very large amount of dedication and determination on my part, and there’s gonna be some foods I’m going to miss for a couple months – and not even really bad ones either lol. Similar to the Paleo diet, this one really limits your food choices, and for the first part, there’s no starch or fats allowed.

I’m hoping this will be the thing that kicks my metabolism back in gear, but if not, at least I tried. In the words of my wise mum, “Time is passing anyway; you may as well do something with it!”